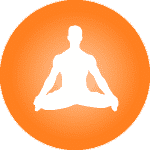 Welcome to my Ashtanga Vinyasa yoga studio in Ingolstädter Straße in the beautiful Frankfurt Nordend, adjacent to the Ostend. Conveniently located and quietly located, the rooms of a former daycare center were lovingly rebuilt in spring 2020. The opening was celebrated on April 6th, 2020. We continue to honour the great energy of the children of the kindergarten in the form of two painted stones; these serve us as doorstops.

The yoga studio is flooded with light and welcomes you with a warm-hearted energy. The rooms invite you not only to our Ashtanga yoga classes, but also to a simple ‘meet-n-tea’. They are also suitable as co-working rooms and overnight accommodation is also available.

I am very grateful and satisfied with ASHTANGA YOGA RAUM FRANKFURT to have arrived in my favorite environment in wonderful rooms. I am happy to welcome you here. Om namah shivaya, Chris.

》We also like to rent our yoga studio or our Shala for workshops, one-off activities or for regular lessons. We charge 35€ or 50€ gross per hour depending on the type of use of our rooms. If you are interested, simply contact us at yoga@ayrf.de or call me directly: 0178-5454132.

》If you play with the idea of building something from scratch, if you plan weekly lessons, then we will certainly find a financial interim solution; in other words, a kind of step-by-step plan if the number of participants at the beginning is below a certain number. After all, it should also be worthwhile for you and of course I would also like to promote or build up a long cooperation. Isn’t it always a give and a take? Here, too, I live the principle of solidarity.

》We are also happy to rent to physiotherapists, masseurs, etc. (a massage table is located in the yoga studio and can be shared).

3 TEACHERS MAKE UP THE AYRF TEAM 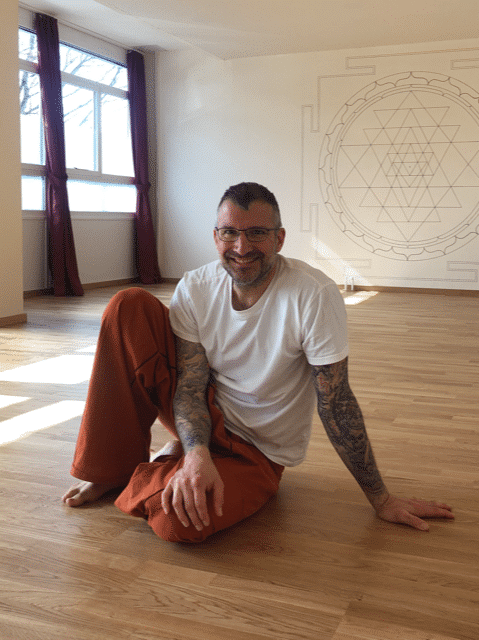 Before I came into contact with Ashtanga Yoga, my life was focused on sports and physical challenges. I worked as an aerobics and fitness trainer in various gyms in Frankfurt and had to be persuaded to my first yoga class. A turning point that finally brought me to where I am today: I have been practicing yoga since 2003 and teaching Ashtanga Yoga since 2005 in Frankfurt and form the head of the team.

In 2021, during the Covid-19 pandemic, I found my current rooms. After an intensive renovation in February and March 2021, I celebrated the opening of my yoga studio on April 6, 2021. Since then I am overjoyed and satisfied with ASHTANGA YOGA RAUM FRANKFURT to have finally arrived, to have finally found a great basis for my yoga lessons. I am happy to welcome you in my yoga studio.

I took the chance to practice with different yoga teachers, but if someone asks me where I learned Ashtanga, the correct answer is: On the mat. Regular practice with yourself will allow you to dive deeper into yoga and learn more about this path and about yourself than you can ever learn through out any workshop or teacher training.

In my yoga studio, I and my team teach students the essence of the Ashtanga yoga system. The fusion of theasanas (postures), bandhas (energy locks) and drishtis (gazing points), also called Tristana, is fundamental for this. I also give an insight into the other seven paths of Ashtanga Yoga. If you are interested in a trial class, please feel free to contact me.

Looking back over the last few years, I have realized that not only the students, but also me as a teacher, are undergoing constant change along the path of Ashtanga Yoga. Over the years, both my view of my own role as a yoga teacher and my way of teaching changed. At the beginning I felt like a strict traditional Ashtanga Vinyasa yoga teacher and today I would rather describe myself as a companion, initiator and supporter on the individual paths of Ashtanga Yoga. I keep tradition in mind, but the focus of my courses is on individuality.

A guru-centered system can have its positive sides if the so-called guru lives up to his role: he should lead his disciples from the dark (Gu) to the light (Ru), from ignorance to knowledge, and from ignorance to knowledge (of the self). But with his status, he should not create space for any kind of abuse or dependencies. As a human being, as a student and as a teacher, I have always questioned such guru-centric systems. The center of Ashtanga Yoga should not lie in a person or institution, but in everyone, regardless of space and time. 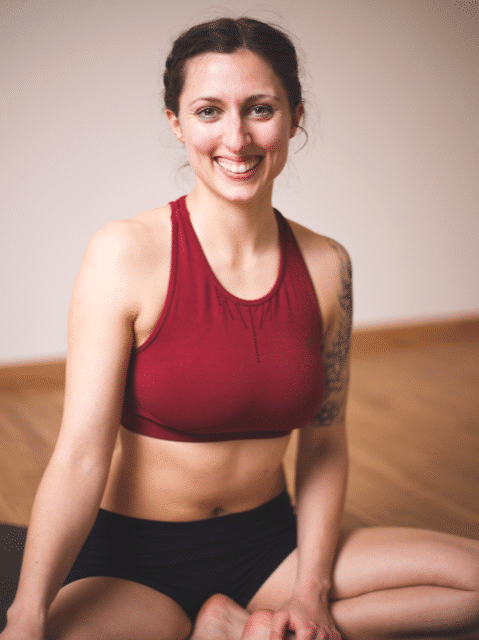 I first came into contact with Ashtanga Vinyasa Yoga at the beginning of 2015. My motivation was initially purely physical: I was looking for a new sporting challenge after I had to give up other sports due to my back problems. Accordingly, I put on the newly found yoga practice also the hope of a health improvement of my physical complaints.

For the first six months I practiced in my own four walls with the help of a Hatha Yoga book and finally with a colorful smorgasbord of Ashtanga Yoga-inspired YouTube videos. The pictures of dislocating yogis impressed me a lot and were one of the decisive factors in keeping me on the ball. Luckily!

That Ashtanga Yoga can be more than the physical expenditure, I only learned through my first lessons in the traditional Mysore style at ASHTANGA YOGA RAUM FRANKFURT and with Chris. In retrospect, I have to say that it was only here that the first real point of contact with Ashtanga Yoga took place: The concise yet calm breathing in the classroom, the focused atmosphere, the common devotion of the students to this yoga practice fascinated me extraordinarily.

Actually, I had planned to visit a yoga studio only sporadically and otherwise continue to practice for myself. But it also turned out differently for me than planned: I practiced as much as possible with my yoga teacher in the Shala in a motivating group and only rarely at home.

Today Ashtanga Yoga and ASHTANGA YOGA RAUM FRANKFURT is part of my daily routine, it shapes my lifestyle, is my conviction and passion. At the beginning of 2018 I started my training with Chris as an assistant teacher and since the beginning of 2019 I have the opportunity to pass on my experience to the students in my own Mysore classes. Since 2020 I am a proud yoga teacher in the team of AYRF.

For the opportunity to get to know Ashtanga Yoga and dive deeper, I am grateful on so many different levels. This practice has caught me both physically and mentally and made me recognize my life from a new perspective. I am determined and i am delighted from the bottom of my heart not only to continue along this path in the years to come, but also to pass it on. I am looking forward to meeting you in the yoga studio in The Ingolstädter Straße in the beautiful Nordend (on the border to the Ostend)! 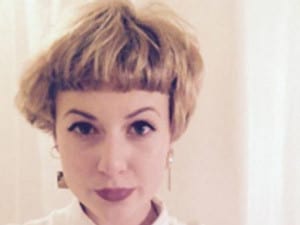 My first contact with yoga was thanks to my mother at about 11 years old. The access to yoga was then very free and playful and so I could make friends with the idea that Ashtanga Yoga is probably not necessarily just such an “adult thing”.

I came to my first Ashtanga Vinyasa yoga class two or three years later after my father suggested I take a class with some school friends. This course was led by Heather from pink elephant, who still accompanies me as a close reference person, yoga teacher and friend. The combination of physical challenge without competition, relaxation after tension and the directed focus on one’s own mat, one’s own body, one’s own mind, I liked from the beginning.

As a result, I attended the guided Ashtanga Vinyasa Yoga class more or less regularly until 2010 when my father, Flippo, and Heather opened the Ashtanga yoga studio pink elephant in my hometown Ansbach together. From now on, a much more regular Ashtanga Vinyasa yoga practice began and I got to know the traditional Ashtanga Yoga Mysore style.

In a difficult time for me as an adolescent woman – marked by identity issues, the separation of my parents and a stressful upper school – I began to realize that I could gain more support, peace as well as acceptance and understanding of my body through the Ashtanga yoga practice. The topic of non-violence in one’s own actions and thinking also came up more and continues to occupy me intensively to this day.

When I was 18, I went to India for almost three months. In the following years I was able to get to know various teachers and their teaching styles, was able to deepen and consolidate my Ashtanga yoga practice. My father introduced me to assisted and later to teaching for the first time. I have always had a close bond with my father, which was strengthened by the Ashtanga yoga practice and the understanding of it.

As part of my training, I moved to Frankfurt in 2014 and met Chrisand ASHTANGA YOGA RAUM FRANKFURT. Chris welcomed me from the very first lesson with open arms and hearts and gave me the opportunity to participate in the lessons not only as a yoga student, but also as an assistant teacher. I was able to learn a lot from his experience and through my own assist. In July 2018 I moved to Amsterdam and am happy to still be part of the AYRF team.

I am grateful for all the teachers I have met and learned from. To this day, a regular Ashtanga Vinyasa yoga practice for me means confrontation with myself, consistency, self-love and care as well as working on a healthy body and mind. I enjoy regularly representing and supporting the AYRFteam.